Previously we talked about setting up some custom command in a Django project.

I would like to run the custom command in a regular interval. I could use Linux cronjob but it’s hard to manage and check the run history. It would be great if i could setup and manage these scheduled commands on the Django web portal.

django-chronograph, written by wnielson, is a Python Package which allows us to schedule any django-admin command through the web interface. It works well with the UTC timezone but if you have set the TIME_ZONE in your Django project setting.py, there would be time discrepancy.

For more detail about the bug, you can refer to the Issue #36 – Job doesn’t follow the Django’s TIME_ZONE setting.

Thanks opensource, finally i found the root cause in the source code. Here is the forked repository which could fix the problem. (Pull request)

1. The following Python packages are required. Make sure Django >= 1.6.

3. Create a new Django project, since i want to schedule my custom django-admin command, i would just start with the following project.

4. Include the django-chronograph in settings.py.

9. Browse the admin page @ http://[hostname]:8000/admin/ and login with the superuser account which is created during syncdb. There would be the django-chronograph widget on the admin web portal.

10. Add a new job and you can select all available django-admin commands including our custom command hello_world. Set the Frequency such that it will run minutely. 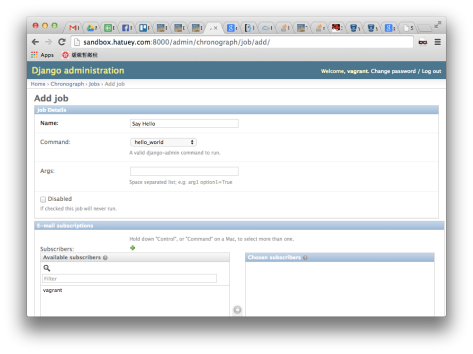 11. You should be able to find your job in the job listing page.

13. The above setup works fine with SQLite but if i change to database to PostgreSQL and you have setup more than one django-chronograph jobs, they would not be executed. I am not sure what cause the problem. I guess sth related to the psycopg2 driver as stated in StackOverflow – Forking Django DB connections. Feel free to post me if you have any idea.

If you are using Django <= 1.5, the following notes may help.

This site uses Akismet to reduce spam. Learn how your comment data is processed.

Searching in the cloud